Come read the review of the Samsung Galaxy S3. We will evaluate the design, phone speed, package contents and new features and more. This top-equipped mobile phone really deserves a proper review. Samsung Galaxy S3 is simply number one on the market and the competition is easily fought.

Let’s start nicely from the beginning, so first I will describe what is hidden in the box after buying a phone. After opening the neat box, the phone itself will look at you right away. Below it is a paper partition, under which the instructions are stored. Below the instructions are earphones in the color of the phone with additional earbuds, a USB cable and a charging adapter for the socket terminated with a USB connector. You won’t get anything more with your phone, the wireless charger is considered an optional accessory and you have to buy it separately.

Samsung Galaxy S3 is made of high quality plastic, which is slightly shiny and can resemble ceramics. The manufacturer named this plastic HyperGlaze. There are currently 2 color variants – blue and white. I was more impressed by the blue design. The back of the mobile phone is slightly convex and we do not find any sharp edges on it, all corners are rounded and seamlessly connect to the frame around the display, which is silver and is also made of plastic (at first glance it looks like metal). The optics of the main camera protrude slightly above the level of the battery cover, but this is not terrible. The front of the phone is good, dominated by a huge, slightly curved display and an expansive home button underneath. In addition to the home button, another 2 sensor buttons have found a place – back and properties. The area above the display is dedicated to the front video call camera and the speaker for calls. There are also small circular ambient light sensors and a notification diode. The Samsung Galaxy S3 holds very well in the hand, is pleasant to the touch and is light and relatively thin for its size. Definitely take a look at gallery where you can find photos of this phone from all sides.

The first thing that will interest you right after turning on the Samsung Galaxy S3 will be the giant capacitive Super AMOLED display. It has a diagonal of 4.8 inches and an HD resolution of 720 × 1,280 pixels. The high fineness of 306 DPI ensures that you do not recognize transitions between individual points. the display has excellent contrast and is easy to read in the sun. The color rendering is perfect, typical for AMOLED displays. Sometimes the colors may be too colorful, but I like that and the technology just used is to blame. Thanks to the large diagonal, the whole phone is really big and difficult to operate with one hand. I rate the display positively and I am extremely satisfied. 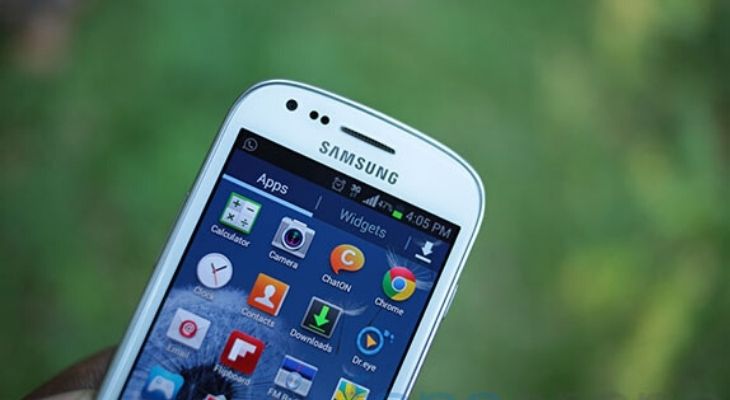 Samsung Galaxy S3 comes from the factory with the Android 4.0 (Ice Cream Sandwich) operating system. But if you are looking forward to pure Android, I will probably disappoint you. Samsung has pre-installed its graphic superstructure called TouchWiz in the phone – in the latest version 4. I have never been a supporter of this superstructure, but I must point out that a step forward took place here and I became friends with the superstructure right away. I would see the disadvantage in the high demand on RAM, who will mind, will certainly install an alternative ROM, such as Cyanogenmod. The whole phone responds really fast and I did not notice any jams or unstable behavior. I also like terminating running processes by dragging to the right. Android 4 has succeeded, but one has to get used to it when switching from an older version.

The rear camera has 8 Mpix and the largest possible resolution of the photo will be 3264 × 2448 px. The optics are, of course, equipped with autofocus and a diode flash will help it to illuminate darker areas. The camera lens protrudes slightly from the body profile, I estimate 1 mm. The quality of the photos is amazing, the photo can be taken from the locked state in as little as 1 second. For lovers of photo series, I have good news, because you can catch up to 8 photos per second. What am I missing on the phone? Unambiguously hardware trigger. You will have to click on the display. The phone software also offers interesting functions , it can mark the photographed people and offer them to send the photo directly. The gallery is also good, the photos load quickly and everything is smooth. I really like the fact that the Samsung Galaxy S3 can sort photos according to the people taken. Video can be shot in FullHD resolution (1920 × 1080) and at 30 frames per second. Of course, you can also take pictures during filming.

I must also mention the processor. The Samsung Galaxy S3 has a quad-core Exynos 4412 processor and each core has a 1400 MHz clock. This is ample enough to browse websites with demanding objects such as Flash, etc. Acceleration of 3D graphics is in charge of the Mali 400 MP graphics chip. Personally, I think that the 4 cores are up to the phone and it will be difficult for the average user to look for their application. But for playing the most demanding 3D games, excess performance will certainly be useful. From the speed of the phone as a whole, I’m surprised the powerful heart is really familiar. If you want to know further technical specifications, grind into the parameters section , where there is a clear table with everything that might interest you.

Finally, the manufacturer took to mind the weak endurance of smartphones and put a real flashlight in this king of mobile phones. The battery has a capacity of 2100 mAh, but even so, the phone can spin nicely with it, for example, when watching HD video or playing games. The phone’s life is around 2 days in normal use. But if you’re constantly on the phone or playing games, the Samsung Galaxy S3 will be happy to talk about the power grid in half a day with the display brightness at maximum. If you leave the phone in a locked state, you will be on reception for over 4 days and that is not bad at all. I’m guessing that another non-original battery with a slightly larger capacity will soon appear in stores and the endurance will be even better.

If you are waiting, like me, for the date when the Samsung Galaxy S3 will be in stock in stores, you will definitely be interested in the price . This is not very favorable at the moment. The phone can be pre-ordered for an amount around CZK 15,000. The sale starts on June 4, 2012 and I guess that in half a year the price will drop to a more pleasant level.