by Jacob Warrior
in Apps, Games
0

Spring training is wrapping up and the regular season of Major League Baseball is upon us once again. As is the case with most sports leagues, the video game world likes to dish out its best representations to coincide with the start of the actual seasons of the sports themselves. For baseball, we have MLB 12: The Show.

Many people tend to complain about sports titles and their lack of improvements year over year.  That may be fair in some aspects, but in others, it really isn’t.  Once developers get a game to a certain level, it’s hard to improve it drastically each year while still keeping the title realistic.  Luckily, MLB 12: The Show maintains its realistic feel while adding some improvements that true baseball fans should love and appreciate.  Is it the perfect sports game?  No, but those don’t really exist.  At least not yet.  MLB 12: The Show does come close, however, making it a must-have for baseball and sports fans alike.

Before we get into the visuals, presentation, modes, and other features of MLB 12: The Show, let’s jump into the steak and potatoes of the title: the gameplay.  The biggest highlight in terms of gameplay is its incorporation of true ball physics.  In essence, true ball physics creates realism in how the ball spins, bounces, and ricochets off objects.  If you’ve ever played baseball, you know this is a huge part of the game, and the developers of MLB 12: The Show did a great job of implementing it here to a highly realistic degree.  In fact, I’ll go ahead and call it one of the best improvements I have ever seen in a sports game.

Gamers who have enjoyed previous MLB titles will definitely notice the difference with true ball physics in MLB 12: The Show, as developers applied actual mathematics to replicate accurate ball spins off of objects.  Balls will bounce off the pitchers mound, bases, walls, and everything else accurately.  Balls will also lose their momentum just as in real life, which will put your fielding skills to the test.  The different bounces make gameplay more interesting, as you will experience line drives that sink and rise depending on how they are hit, as well as various choppers and long balls.

The two other major gameplay improvements are Zone Analog Batting and Pulse Pitching.  Zone Analog Batting is a hybrid of previous titles’ Zone Batting and Analog Batting features.  The final result is a very realistic method for swinging the bat that allows you to immerse yourself into the gameplay of MLB 12: The Show even more.  It does take some practice to get used to the system, but once you get it down pat, hits are very satisfying.  You basically stride with the right analog stick and swing into the direction of the ball with the left analog stick.  To adjust for differing skill levels, the game offers five different settings of Zone Analog Batting, from Rookie to Legend. 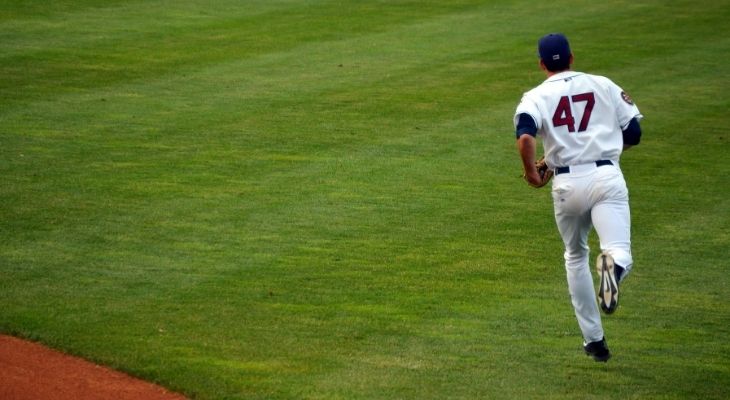 Like Zone Analog Batting, Pulse Pitching offers five different skill settings, from Rookie to Legend.  Pitching also takes some time to get a handle on, but it’s as satisfying as batting once you hone your skills.  Pulse Pitching goes back to The Show’s old Classic Pitching.  It’s an immersive way to pitch that combines a specific pitcher’s attributes along with your own skill.  The better the pitcher, the smaller their pulse ring, and vice versa.  If you are using an ace, such as CC Sabathia, you will be able to hit your proposed pitch spots with greater ease.

Other gameplay improvements worth noting in MLB 12: The Show include some new animations that give the game a more realistic feel both on offense and defense.  The animations were to be expected, of course, with the implementation of something as original as true ball physics.  You also get some nice add-ons in the form of enhanced collision awareness.

Presentations of the game

In terms of presentation, MLB 12: The Show is hard to beat.  This is thanks to the addition of what the game’s developers refer to as TruBroadcast Presentations.  What the feature does is try its best to replicate the feel of watching an actual baseball game on television.  This includes over 10,000 presentations, better camera shots, improved AI, and on-screen displays that are designed to look like the real thing.  Developers reportedly studied tons of actual games in the regular season and playoffs to get just the right look for MLB 12: The Show.  I must say, their hard work paid off, because it does feel like you are watching a game on ESPN or TBS.  The inclusion of handy stats such as pitch count, runners left on base, and more give you an insight into the game without overloading you at the same time.

Audio is superb, both with sound effects and commentary.  A solid hit will create a nice pop off the bat, while a dinger won’t be as audibly impressive.  According to the game’s website, they have added over 70 hours of recording to keep the audio and commentary from getting stale.  As for how the game looks, beyond its realistic animations and physics, player models look true to form and so do some truly beautiful stadiums.

The game modes in MLB 12: The Show are varied enough to offer a little bit of something to gamers of differing tastes.  Road to the Show allows you to control a player on his way to the big leagues.  Diamond Dynasty offers in-depth customizable online gaming complete with training, team budgets, management, creation, and more.  Franchise is good if you are looking for simulation close to an actual Major League season.  Last, but not least, is Online mode where you can test your skills against human competition.

The improvements to MLB 12: The Show are impressive.  There’s little doubt that baseball fans should give this title a purchase, and even sports fans looking for a game with high replay value should do the same.  The game’s realism in terms of presentation and gameplay is top notch, and it has all the little intricacies of real baseball included to offer an enjoyable gaming experience.

Understanding the Importance of Data Mining

How to Choose The right Corporate Gifting Company